The use of robots, AI and RPA, is on an unstoppable growth path. The current corona crisis appears to act as a catalyst for this trend. Service robots disinfect hospitals and other locations with the help of UV rays; AI is used in research into medicines; and RPA software robots are absorbing the increased administrative burden for the government.

“Over the past year, Rocking Robots has reported on developments concerning robots, AI and RPA for executives in the Dutch market. At the same time, we saw an increasing demand for international content related to these growth markets. We are now responding to this with the launch of rockingrobots.com,” says Editor-in-Chief Marco van der Hoeven.

Just like the Dutch edition, the rockingrobots.com platform will bring news, trends, background information and practical stories in the form of articles and video reports. The platform will create content in separate sections for the markets in England, Germany, France and Denmark, where many developments in the field of robotics, AI and RPA are taking place.

RockingRobots tells the story of humans, robots and artificial intelligence. More than ever, technology is affecting society as a whole, from people and companies to government and healthcare. The editorial staff of this platform follows the digital transformation, and the people who are shaping the new world.

Mediabureau Leiden BV was set up by Marco van der Hoeven. He has been active as a magazine maker and video producer since 1996, particularly in the fields of AI / robotics, Public Order and Safety, politics and ICT. 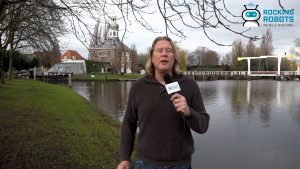