“The robotic arm has become part of me”

An advanced robotic arm is more than just beautiful technology. Use of such a prosthesis is not just about confirming, as a conversation with Arie Rommers shows. He has been using a bionic arm, the Bebionic, for some time now. “You can get a really nice bionic arm, but your brain has to control it, so you have to feel good about yourself”

September 10, 1976 half past five is a moment that Arie Rommers will never forget. Then an explosive went off in his hand, which he played with in his room as a child. He lost his hand. Since then he has had many different prostheses, starting with primitive artificial hands. Today he is one of the users of the most advanced bionic hand, the Bebionic from Ottobock in Germany. 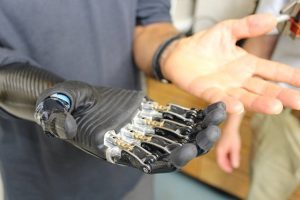 “You have partly become robotics yourself, or bionic,” he says. And putting things in perspective: “On the other hand, a large part of the Netherlands has now become bionic with things like lenses, knees and pacemakers. I am very happy with that, but at the same time I am also dependent on it. I can get a hook or some kind of puppet hand, but that won’t get your phantom hand back. Because you still feel your hands, your fingers, your nails. With a robot hand, you can really see the fingers you still feel moving again. It becomes part of your own body. ”

The bionic hand from Ottobock is not just a prosthesis that is just put on. “When you request such a prosthesis, you will receive a tough training in a rehabilitation center, in which it is examined whether you can borrow such a hand for a number of years.” This process also involves an intensive psychological process, because many people whose limbs have been amputated also need help with that. 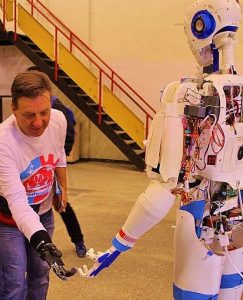 This also applied to Rommers: “Because of that training I was again confronted with the trauma from my childhood, when I lost my hand. It gave me nightmares. This was subsequently addressed with EMDR therapy. During that therapy I learned to forgive myself for playing with something dangerous, a child’s brain simply works differently from that of an adult person, and children are often less able to assess dangers. That is also part of rehabilitation, because you can get a very nice bionic arm, but your brain has to control it, so you have to feel good about yourself. ”

He continues: “Wearing a bionic arm is top sport. It is not for nothing that I started cycling and kickboxing. Incidentally, or with a different prosthesis, the robotic arm would otherwise break. I have changed in a positive way. And the shame that you used to feel is gone. Nowadays it is very normal to show that you are missing an arm, while in the past it was much more hidden. In that sense, acceptance by society has also changed. ” 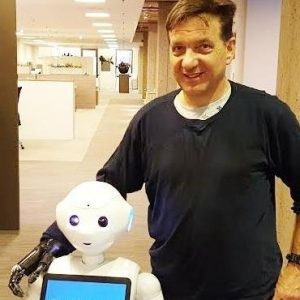 He receives mostly positive reactions, especially from children on the street. “I then show them how such a robotic hand works. Sometimes you hear: “I want such a hand too!” There are also negative reactions, but they mainly come in anonymously via social media. Because I have noticed that some people like to joke about disabilities, but you have to be above that. ”

“I’m for the free word, but do it in front of the people themselves.” He therefore also gives lectures at schools. “With the help of that robotics, I can then say that students who are different shouldn’t be ashamed of who they are, and that they should be proud of who they are. That is why sport is important, it brings people together. I am very happy with that robotic arm, it has become part of me. Robotics has made me freer, it changed me. ”