Trends in robotics at ERF 2022

From 28 to 30 June, the thirteenth edition of the European Robotics Forum (ERF) will take place in Rotterdam. With about a thousand visitors, this will be the largest robotics event in Europe, where a diverse group of participants, from industry and science to government and end users, will exchange views on a wide range of topics.

The first European Robotics Forum (ERF) was twelve years ago. The event first took place in 2010 in San Sebastian, Spain, as a forum organized by the European Commission that focused on robotics research and trends, in the run-up to Horizon 2020. Even then, interaction was a central goal, so workshops were an important element. In this environment science and industry came together to share developments in robotics. In those twelve years, the ERF has grown considerably, into the thirteenth edition that is now under construction under the auspices of euRobotics and is organized by the University of Twente. Thousands of participants are expected this year.

“Because the ERF has grown so quickly, it was important to keep the focus clear,” says Inge Rehorst, project manager at the University of Twente. “We have worked hard on that in recent years. You have to be careful that it doesn’t succumb to its own success because it grows so fast. For example, we made sure that the workshops also have real content, and not just provide an update from the previous year. It is also important to reach the right people, for example people who are involved in ethics.” 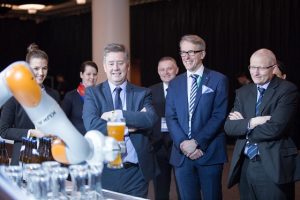 As a result, the upcoming edition has a combination of plenary sessions and workshops. An Academic Track has been added for the exchange of scientific knowledge. “The emphasis is on quality. We have therefore explicitly looked at the content of the workshops. We have also opted for a plenary program with an overarching theme.”

This year’s theme is Sustainability, in the broadest sense of the word. “How do we, as a robotics community, deal with issues such as climate change, sustainable networks, society and energy, but also sustainable production in robotics.” In the context of this theme, the ERF will also take place at a sustainable location: Ahoy in Rotterdam. A sustainability task force will help exhibitors to work more sustainably during ERF. 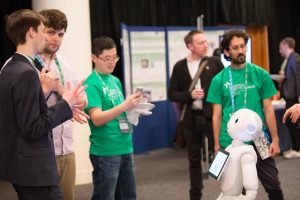 A very visible trend is the increase in the number of workshops on the ethical and social side of robotics and AI. Another important theme, which has been in the spotlight for some time, is inspection and maintenance using robotics. Cybersecurity remains important, as is sharing of data in order to achieve ‘Industry 5.0’. “This requires a different way of working, people are suspicious about sharing. But as an organization you cannot avoid sharing more data.” Regulation is also a related theme at the ERF.

According to Rehorst, the event is intended for a wide audience, from industry and knowledge institutions to government and end users. And because it is an international event, she expects about three quarters of the visitors to come from abroad. “It is not a sales fair, we want to show what is happening in Europe in the field of robotics. All these different groups play an important role in this. This goes for the end users as well, because we would like to know their view on robotics-trends.”

“It is very useful for them to see what is happening in the field of robotics. At the same time, they can communicate what they, as end-users, actually need from the robotics community. And, because this is the largest European robotics forum, there is an enormous exchange of knowledge. The forum is easily accessible due to the good combination of visitor groups. I hope that the visitors will especially be inspired and gain ideas about the practical application of robotics.”

You can register for the European Robotics Forum here