AWS has announced its IoT RoboRunner is now available in preview in parts of the US and Europe. AWS IoT RoboRunner is a robotics service for enterprises to build and deploy applications that help fleets of robots work together seamlessly. With AWS IoT RoboRunnerthey can build applications that make it possible to interoperate and orchestrate robots from a single view by reducing the complex development work required to connect robots to each other and the rest of your industrial software systems. 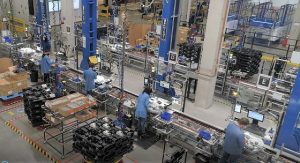 AWS IoT RoboRunner collects and combines data from each type of robot in a fleet and standardizes data types like facility, location, and robotic task data in a central repository. Developers can use AWS IoT RoboRunner’s APIs, and software libraries to build applications on top of the centralized repository for use cases such as task orchestration, space management, and robot collaboration. With AWS IoT RoboRunner, enterprises can improve efficiency of robotics fleets and reduce costs of running robotic operations.

The AWS IoT RoboRunner service is available in preview in US East (N. Virginia) and Europe (Frankfurt) Regions.

Automation as a competitive advantage: CIO’s take the...

Beyond Imagination and GelSight pair tactile sensing with...

Channel: Who are the 2020 Automation Champions?