CaliBurger, announced it will open a restaurant with robotic food preparation, and a seamless ordering and payment system that leverages opt-in facial recognition and cashless payments. Located in Shoreline just north of Seattle, the new CaliBurger location will feature Flippy, an autonomous robot system taking over the work of an entire fry station.

While the Shoreline store will use Flippy for french-fry cooking initially, Flippy can also cook chicken breasts and tenders, onion rings, sweet potato waffle fries in addition to fries. The system’s image recognition technology allows for real-time quality control to prevent any food quality errors during the cooking process and before any food items reach customers.

This is the first time the Seattle market has seen a fully autonomous robotic system, which demonstratively enhances production speeds, improves labor allocation, and adds additional health and safety checks in the kitchen. 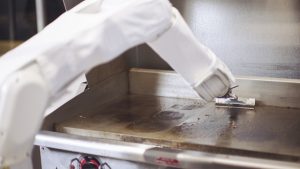 “The deployment of Flippy enables CaliBurger to retrain our staff to spend more time tending to customer needs to better improve the guest experience, while supervising the robotic system that’s handling the cooking,” said Jeffrey Kalt, CEO of CaliBurger. “This results in happier workers, more satisfied customers, and a more profitable business.”

According to Kalt, one of the benefits of Flippy is the ease of installation that can be accomplished overnight. “Being able to swoop in after a CaliBurger closes, install Flippy and train staff the following day is a monumental advantage for us,” Kalt added.

Developed by Miso Robotics, the technology that brings Flippy to life has been in development for almost five years and represents over a quarter million man hours of engineering time devoted to building the base software, intelligence, and platforms.

In addition to new technology behind the fry line, the new CaliBurger restaurant will also feature PopID’s latest face-based ordering and payment system. “The PopID platform allows our staff to focus on tasks other than taking orders and processing payments,” remarked Kalt. “It also increases average ticket size, improves throughput, and lowers payment processing fees, resulting in increased free cash flow.” PopID is currently being accepted on self-ordering kiosks and payment terminals connected to the point of sale in more than 100 different restaurants and retail concepts around the major colleges throughout Southern California.

Interview John Kucera: Why Salesforce is selling its own RPA

Are robots and IoT coming to the...