More and more companies are using automation solutions such as robots to support their employees in their work. This trend is veering away from single projects towards end-to-end automation. But who is going to do that? In practice, the employees themselves can be an important factor in the adoption of automation and in scaling it up to innovate with data and AI. 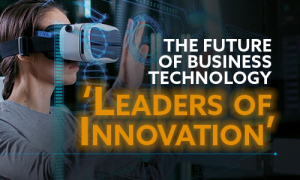 “The demand we are now seeing from companies is that processes need to be automated end-to-end,” says Renzo Taal, Senior Vice President and Managing Director for EMEA at UiPath. “Through COVID-19 we have noticed that processes that are not fully automated can cause problems. And then it can also boil down to very simple things. It doesn’t have to be immediately complex.”

“Automation is now accepted because of that need, and we are seeing robots being used in a wide range of applications, from administrative help in providing COVID support to help in the service environment of telecom companies. The degree of automation has already become a factor in determining the value of companies in acquisitions.”

Physical and virtual robots work together in the logistics sector. Robots process packages, and software robots help with administrative processes. The beauty of this trend is that people see the effect immediately, while the returns are quantifiable at once.”

He acknowledges that there is still much to be explained about the potential of innovation with robotics at times, but he is optimistic: “I saw a similar development seven years ago when I started working in CRM. The business owners of some companies clearly see the impact and ask us to help bring that story to the board’s attention.”

“What helps on this front is that it’s not merely a matter of expectations. There are already plenty of concrete use cases with RPA and AI. A recent example is a large telecom provider in southern Europe, which used a robot to ensure that the most loyal customers were the first to receive a new phone. The wonderful thing about this process is that it got off the ground because someone in the organisation started working as a citizen developer to make the robot. That case is now being used as a best practice for the rest of the organisation.”

“An additional effect of process robotisation in this case was that the service level for the customers went up, because such a robot makes no mistakes and does exactly what it is supposed to do. The number of service calls has been noticeably reduced as a result.”

The next step in automation is to make such processes ever smarter with features like process mining and AI to arrive at the de facto Fully Automated Enterprise. “It’s about the entire process, from start to finish, from discovery with the help of process mining and task mining. We see that people can start building their own robots on that basis, because all the actions that can be automated are thereby well mapped out. Technology such as document understanding is also used to process documents automatically.”

“This has been initiated with unattended robots which run at the back end. The next step is to install attended robots to help people at the front end. You can then build all kinds of things like apps and chatbots around them, at which point you have automated the entire process. That is what parties want to talk about. It goes beyond traditional RPA, that’s part of it, just like process mining.”

A robot for every person

When it comes to robots, UiPath’s vision is ‘a robot for every person’, and more and more companies are using robotisation in practice to help their employees with common, repetitive tasks as much as possible. “The employees thus get a digital personal assistant who does all sorts of things automatically, from generating reports to making appointments. That is an example of the future of business technology.”

Here once again, it doesn’t have to be complicated to be effective. “An example is an out-of-office robot for a top developer. This sounds simple, but it is crucial in practice. Because he works for a company that has an SLA under the terms of which a request for support is processed within two hours. If this does not happen, the agreement provides for a stiff penalty. Now the robot ensures that customer calls are no longer accidentally missed if someone is not present, but everything is taken care of at the back end.”

Citizen development is a democratising approach that enables you to build your own robots. “Consultants do a good job, but they mainly look at things like processes. Once that is done, a great deal of progress can be made with people building their own robots, so that you also empower those employees.”

“The social component is that education and companies succeed in giving people a chance to develop. Because you don’t want people to be left behind. It’s important therefore to enable people to learn the right skillsets so that they can make their contribution. This is not only what the future holds in store —  it is already here. We see that both government and business are working on it now.”

“The impact that a fully automated enterprise can make is being felt, and we see that this is now also getting attention from executives like the CFO. The impact on costs and quality is measurable, including in audits. Because a robot does not make mistakes. You can do audits on a scale that was previously impossible. This in turn gives people room to do their job with human qualities such as creativity and to show their added value.”

“It is the future, yet at the same time relatively new nonetheless. This means that it is important to be open to it. We see that it can go incredibly fast in organisations that are open to it. Start experimenting with it, because employees are extremely enthusiastic once they get the hang of it and come up with all sorts of ideas themselves for even more improvements.”

Want to know more about employees and automation?  View this on-demand webinar