Knightscope, developer of security robots, has launched its Automatic Criminal Detection Capability (ACDCTM) feature, a real-time and extensive criminal data intelligence solution, ACDCTM utilizes the facial recognition technology on K1 ASRs and a legal open-source database of over 75 million criminal law enforcement files to detect and alert users to a person previously convicted of a crime or possible threats on their property.

The technology is available immediately to new and existing clients that subscribe to the commercially available K1 Tower and the future K1 Hemisphere due to be released during 4Q 2022.

According to the developer intelligence gathered through ACDCTM will help public safety officials better prepare for today’s threats by delivering real-time, hyper-local information for improved situational awareness. Clients will be able to rapidly assemble this data during incident investigations through the included Knightscope Security Operations Center (KSOC) user interface, or by engaging the Knightscope+ monitoring professionals should they elect such coverage.

According to Statista, over the last three decades arrests made ranged from over 7 million to over 14 million annually. A high number of arrests does not necessarily correlate to a high number of solved cases, and in the U.S., many cases remain unsolved. The crime clearance rate, or rate of closed cases, was less than 50 percent for violent crimes in U.S., and less than 20 percent for property crimes. 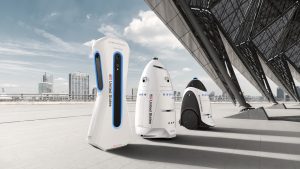 Additionally, a study from HealthyPeople.gov finds that while 7 million people are released from jail and 600,000 are released from prison in the U.S. each year, recidivism is common. The study finds 2 out of 3 people are rearrested and more than 50 percent are again incarcerated within three years of their release.

“Knightscope is continually evaluating ways in which we can deter, detect and report potential criminal activity,” said William Santana Li, chairman and CEO at Knightscope. “Imagine if we were to assist one port in identifying a known terrorist or help warn officials of a sexual predator on your child’s school campus—this is truly a game changer in protecting the places we live, work, study, and visit.”

“We need to provide our nation’s 2+ million law enforcement and security professionals actual tools for them to be able to do their jobs effectively to keep our communities safe. We would never dare treat a soldier in this manner of being charged to secure a country with a technological equivalent of a #2 pencil and a notepad we see today on our streets,” continued Li.

Universal Robots’ UR20 launched in U.S