Robots take to the street in Las Vegas and San Francisco

In both Las Vegas and San Francisco more autonomous vehicles will be operating on public roads. Motional  will be testing driverless vehicles on public roads in Las Vegas, navigating intersections, unprotected turns, and interactions with other road users, including pedestrians and cyclists. And Waymo will start a pilot with autonomous taxi’s on the usy streets of San Francisco.

Motional and Lyft are planning to launch a  fully-driverless ridesharing network in 2023. Motional is a joint venture between Hyundai Motor Group and technology company Aptiv. Motional claims a safety record of 1.5 million miles in a two-year self-imposed safety evaluation process that took hundreds of employees more than 100,000 hours to complete. During this process TÜV SÜD was given access to the company’s proprietary systems, technology, and operations.  Upon completion of its assessment, TÜV SÜD provided Motional with an endorsement to operate with an empty driver’s seat. The state of Nevada granted Motional permission to do so last November. 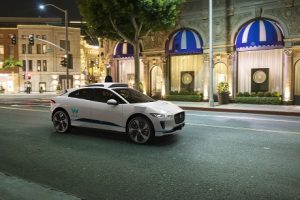 Waymo started in the San Francisco Bay Area, and has already tested its technology on the roads of California. It recently surveyed nearly 1,000 San Franciscans about their transportation needs. When asked to name factors making it hard to get around the city, 63 percent of respondents pointed to dangerous drivers, 74 percent to parking and 57 percent to stressful commutes. Nearly a quarter didn’t feel safe on San Francisco’s roads at all. Waymo claims autonomous vehicles can change this.

San Francisco is a challenging environment for autonomous vehicles, with rolling hills and sandy ocean highways, tiny side streets and huge freeways, bike lanes and tram tracks. And the streets are busy with traffic, pedestrians, cyclists, scooters, and emergency vehicles, cable cars, trolleys, streetcars and light rail vehicles. According to Waymo its 360° vision system and lidar is able to navigate the complexities of urban driving.

The highly sensitive cameras can spot traffic lights changing at a long distance – even among the papel picado on 24th Street – to enable smooth driving. And cameras and lidar can instantly spot a jaywalker sprinting across our path and act appropriately – even when they emerge suddenly from behind a vehicle in the oncoming lane.

UCB and Microsoft expand collaboration on drug development with AI

Research: Robot Boom in US Manufacturing is...