Home Bots in Society RobotWise: Better social skills with the help of robots
Bots in SocietyInternationalPeople in RoboticsSpotlight

RobotWise: Better social skills with the help of robots

In a playful way, children learn to work better together by programming robots. Not only school children, but also employees of companies can almost literally brush up their skills in a fun way using robots. Rocking Robots spoke with the initiator of this concept, Tamar Neter from RobotWise.

RobotWise was created by Tamar Neter’s amazement at the way her children were taught at school. “The extra work my daughter was given was actually more of the same, adding little to the normal curriculum. That could be more fun in my opinion. Because the books have hardly changed in decades, while society has completely changed. Partly due to the rise of technology. ”

She also saw the consequences of this in her own work in online marketing. “I worked a lot with programmers and sales people. I also saw that there was a clear mismatch between technical and non-technical people. At school you don’t learn to deal with diverse technology, nor do you learn to work with people who are interested in technology. ”

Tamar then talked to her children’s school to initiate that dialogue. “To their question” How? “I answered” Very simple … with robots “. They are accessible, have a high ‘fun factor’ and you immediately see the output of your input. When you program physical robots you immediately see what you have done, you test whether it works and you become aware of your own skills and talents throughout the entire process. ” 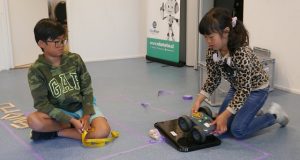 To test whether her vision was realistic, she also involved child psychologists and child coaches at the start of the project. “They were also enthusiastic. Due to the physical aspect of the robots, all children were involved in the program and each level of intelligence was automatically addressed. Every child is attracted to one of the robots, also in special education groups. ”

That was the basis for setting up her company RobotWise. “That was quite a step. In my previous positions I have always been involved in change, but now I became the trigger for that change myself. ” Tamar started with pre-schoolers. “There were some technology programs, such as learning to code, but that was always for the senior years. However, pre-schoolers do not see any boundaries and you need that attitude when working with technology. In fact, everyone should get this attitude again. ”

RobotWise has developed its vision into a cross-curricular curriculum with educational robots. This allows you to teach a certain subject in a short time based on fun multidisciplinary assignments. “That was initially too ambitious. In practice, it works better to start by exploring the robot itself and its value for teaching, and then applying this in several lessons. ” 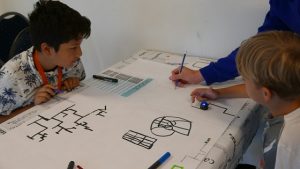 She describes what RobotWise currently offers as socio-educational robot programs. “You can use them in class in a short program of one hour, for example. But we prefer to integrate technology into the existing curriculum. Our trainers are trained according to the didactic method of RobotWise. Also part of this is to include the teachers in the program, so that we can help them achieve their learning goals with educational robots as a tool. ”

Holiday camps were soon added to the offer. “Parents saw how enthusiastic their children became about the robots. This was followed by secondary schools and in some cases also higher education, such as the Hotel Management School. “That’s because we don’t emphasize technology, but social and cognitive skills. It is mainly about learning to cooperate, communicate and increase self-insight. ” Meanwhile, companies are also making use of RobotWise’s programs.

Rocking Robots spoke with RobotWise during the summer school in Amstelveen. Here children can get acquainted with robots and programming during their holiday. “Because of COVID-19, some students, who are already struggling at school, have had little contact with their school or their friends. The summer school is therefore not intended for the cognitive part, but mainly aimed at supporting social-emotional development. Our robots are part of this, in addition to dance, sports and painting. In this way we give the children the strength to go out and play together again. ”

Video: “So many new ideas, the pipeline is almost impossible to manage”

‘More than half of digital government programmes...