The World Robotics 2021 Industrial Robots report shows a record of 3 million industrial robots operating in factories around the world – an increase of 10%. Sales of new robots grew slightly at 0.5% despite the global pandemic, with 384,000 units shipped globally in 2020. This trend was dominated by the positive market developments in China, compensating the contractions of other markets. This is the third most successful year in history for the robotics industry, following 2018 and 2017.

“The economies in North America, Asia and Europe did not experience their Covid-19 low point at the same time,” says Milton Guerry, President of the International Federation of Robotics. “Order intake and production in the Chinese manufacturing industry began surging in the second quarter of 2020. The North American economy started to recover in the second half of 2020, and Europe followed suit a little later.” 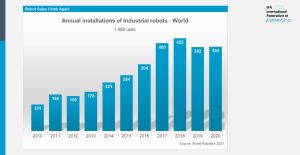 Asia, Europe and the Americas – overview

Asia remains the world’s largest market for industrial robots. 71% of all newly deployed robots in 2020 were installed in Asia (2019: 67%). Installations for the region´s largest adopter China grew strongly by 20% with 168,400 units shipped. This is the highest value ever recorded for a single country. The operational stock reached 943,223 units (+21%). The 1-million-unit mark will be broken in 2021. This high growth rate indicates the rapid speed of robotization in China.

Japan remained second to China as the largest market for industrial robots, though the Japanese economy was hit hard by the Covid-19 pandemic: Sales declined by 23% in 2020 with 38,653 units installed. This was the second year of decline following a peak value of 55,240 units in 2018. In contrast to China, demand from the electronics industry and the automotive industry in Japan was weak. Japan’s operational stock was 374,000 units (+5%) in 2020.

The outlook for the fiscal year 2021 is positive with an expected GDP growth rate of 3.7%. The Japanese robotics market is expected to grow by 7% in 2021 and continue to do so by 5% in 2022. Independent of the domestic market for robotics, the major export destinations will secure demand for Japanese robotics. Even though a major share of production today takes place directly in China, 36% of the Japanese exports of robotics and automation technology were destined for China. Another 22% of the exports were shipped to the United States.

The Republic of Korea was the fourth largest robot market in terms of annual installations, following Japan, China and the US. Robot installations decreased by 7% to 30,506 units in 2020. The operational stock of robots was computed at 342,983 units (+6%).

The export-oriented economy has coped with the pandemic remarkably well so far. In 2020, GDP was down by just 1%, and for 2021 and 2022 strong GDP growth of +4% and +3% is expected. The electronics industry and the semiconductor industry, in particular, are investing heavily. An investment support program launched in May 2021, will further boost investment in machinery and equipment. The demand for robots both from the electronics industry as well as from the automotive suppliers is expected to grow substantially by 11% in 2021 and by 8% annually on average in the next years following. 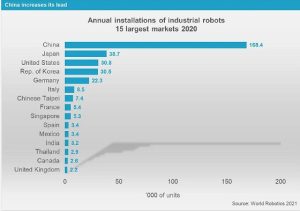 Industrial robot installations in Europe were down by 8% to 67,700 units in 2020. This was the second year of decline, following a peak of 75,560 units in 2018. Demand from the automotive industry dropped by another 20%, while demand from the general industry was up by 14%.

Germany, which belongs to the five major robot markets in the world (China, Japan, USA, Korea, Germany) had a share of 33% of the total installations in Europe. Italy followed with 13% and France with 8%.

The number of installed robots in Germany remained at about 22,300 units in 2020. This is the third highest installation count ever – a remarkable result given the pandemic situation that dominated 2020. The German robotics industry is recovering, driven by strong overseas business. Robot demand in Germany is expected to grow slowly, mainly supported by demand for low-cost robots in the general industry and outside of manufacturing.

In the United Kingdom, industrial robot installations were up by 8% to 2,205 units. The automotive industry rose by 16% to 875 units – representing 40% of the installations in the UK. The food and beverage industry almost doubled their installations from 155 units in 2019 to 304 units in 2020 (+96%). The food and beverage industry had a high share of foreign workers, often from Eastern Europe, is facing a massive labor shortage. With continued Covid-19-related travel restrictions as one reason and Brexit another, the demand for robots in the United Kingdom is expected to grow strongly at two-digit percentage rates in 2021 and 2022. [struggling to connect] The modernization of the UK manufacturing industry will be boosted by a massive tax incentive. The newly installed 2,205 units in the UK are about ten times less than the shipments in Germany (22,302 units), about four times less than in Italy (8,525 units) and less than half the number in France (5,368 units).

The USA is the largest industrial robot user in the Americas, with a share of 79% of the region´s total installations. It is followed by Mexico with 9% and Canada with 7%.

New installations in the United States slowed down by 8% in 2020. This was the second year of decline following eight years of growth. While the automotive industry demanded substantially fewer robots in 2020 (10,494 units, -19%), installations in the electrical/electronics industry grew by 7% to 3,710 units. The operational stock in the United States increased by 6% CAGR since 2015.

The overall expectations for the North American market are very positive. A strong recovery is currently in progress and the return to pre-crisis levels of industrial robot installations can be expected for 2021. Robot installations are expected to grow by +17% in 2021. A post-crisis boom will create additional growth at low double-digit rates 2022 and beyond.

The “boom after crisis” is expected to fade slightly in 2022 on a global scale. From 2021 to 2024, average annual growth rates in the medium single-digit range are expected. Minor contractions may occur as a statistical effect, ‘catch-up’ occurs in 2022 or 2023. If this anomaly takes place, it will not break the overall growth trend. The notable mark of 500,000 units installed per year worldwide is expected to be reached in 2024.

‘More than half of digital government programmes are failing to scale’

Universal Robots President: Q3 results are a strong indication of growth to come

NICE creates an automation ‘Centre of Excellence’ for...

Knightscope kicks off public listing to trade on...