Robotic startup Aziobot, which has been funded by the Rockstart-program, has recently moved to the Brainport Campus in Eindhoven. In this inspiring environment it will further develop both hardware and software of the Aziobot cleaning robot. Rocking Robots talked to CEO and co-founder Sarthak Yadav about his vision on robotics and the role of robots in business.

CEO Sarthak Yadav is co founder of a company with its roots in India. Before that he worked for a startup that was working on robots and self driving cars, which developed prototypes of autonomous technologies. “This experience we wanted to apply somewhere where we can actually create value and increase productivity. Self driving cars are not there yet. But cleaning is an area where there is a lot of tedious work which can be done by a robot.”

“For example, at a food manufacturing facility where one of our robots is being tested right now they have to clean every day. But they don’t have a specific cleaning staff because it’s not their core business. Their job is food processing and packaging. To have a machine which can go around and clean for them is really valuable. So that’s where we are trying to solve issues for organizations who want to innovate.” 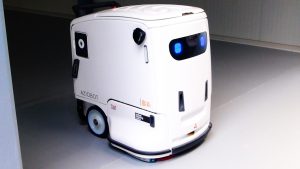 The AI-component of the Aziobot  robot is an important factor to be selected by the Rockstar program. “Since then we have been developing our first product, a floor scrubber robot which targets of spaces from school and hospitals to airports and warehouses. We have already been testing in multiple locations. We have built both the machine and the software in-house, and it’s being manufactured here in Eindhoven.”

The first thing the robot does is create a floor plan, the basic information the robot will use while cleaning. Within the map the robot can work with different cleaning zones, and avoid no go-areas. “You  don’t have to teach the robot, which makes it really easy for users. They can just create a zone and instruct the robot to just clean that. And when it’s done, it will come back, and because every robot is connected the operator will get a message on his phone. And users can check the progress on the web, to be used for analytics.”

The robot can run up to four to five hours with a lithium-on battery inside, and it charges in three hours. Part of the AI is the robot knows when it’s moving, how fast it is going and where it is going. This way it can adjust the flow of water, whereas traditionally cleaning machines use a continuous flow of water. “So you were actually wasting a lot of water. When our robot doesn’t need to put water on the floor it will just stop it, it will only use the water it needs. This also means we were able to make it smaller than other machines.”

Because it’s new technology people are hesitant to invest upfront, without testing. “We understand that, so we opted for a subscription model, so people can try it. In the last months we have seen a lot of engagement.”

The interface of a robot is very important to make people interact with it. “What we are actually seeing is people are trying to test it, because now they’re friendly with it. They want to see how the robot reacts to them when they step in front of it. That is an interesting phenomenon. It makes a sound when it is turning, and we have provided it with ‘eyes’, not just for the cameras but for visualization as well. And when the cleaning is completed it will blink. It is industrial but still you have to think about the interaction of the with humans. The deign is very important.”

How can automation be a force for good?

Robotics and finance: The die is cast